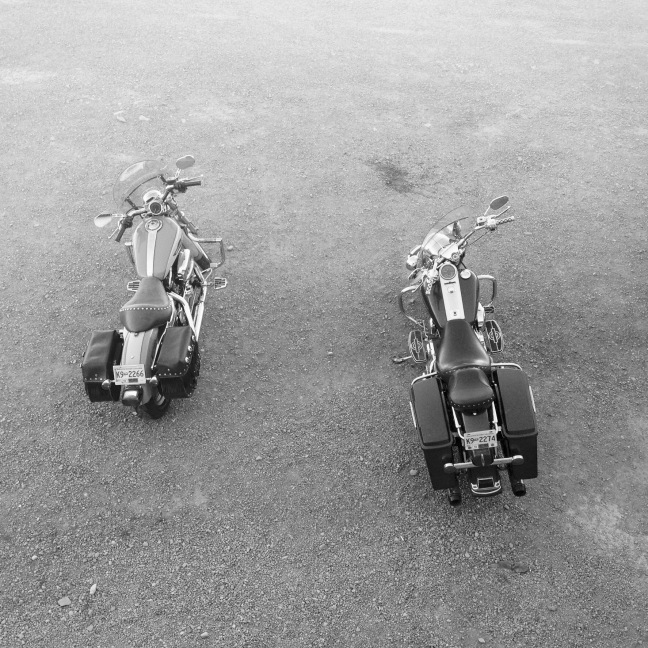 The dude blew by me quickly on the inside lane, then veered hard to the right. He cut across my lane just in front of my bike and made his exit from Highway 99, oblivious to everything except the electronic device in his lap. There were no other vehicles within 1000 meters on the freeway to my rear. This vehicle operator could have casually slipped into the lane behind me and cruised onto his desired exit. Instead he drove like an aggressive idiot, eyes downward. I know it was a dude and he was distractedly driving because I glanced over as I rode on. I had to see where this driver fit into society’s stereotypes.

I spend a lot of time on two wheels. One of the beauties of riding is it gives you a lot of time to think. So as I continued along Zero Avenue, a salad of mixed ideas is being tossed inside my head. The USA is meters away to my right, there is agriculture galore on both sides of the border and  5000 square foot farmhouses dot the countryside. America is a country having a reality show election that is being played out live and everyone actually gets a vote. Canada is a country that always seems to vote for the same government the USA voted in ten years ago. Both nations are facing challenging times where leadership is paramount. Deep subject matter for sure but my thoughts are elsewhere.

The concept of “what is a grey area and its relationship with traffic flow?” has grabbed a hold of my grey matter. What now constitutes the rules of the road? Everything from U turns to speed limits seems to be fair game for personal interpretation of the rules. I’ve had a rant stewing for a long time now about self entitled drivers. When did tailgating in the slow lane at 70 mph become the new NASCAR 500? Back off everybody, come on. Since moving to East Van, I’ve added self entitled cyclists to that list. Roundabout protocols is just a start but inconsiderate recklessness and silent passing without courtesy is a riding shame. People are now operating their bikes like they drive cars.

As I was self righteously preparing my thoughts to rip a shred off of all those bad drivers and self absorbed cyclists, riding on two wheels gave me the time to look inward. I pondered my disapproval of their skills and attitudes while riding in the fall sunshine under the shimmering watch of Mount Baker. Slowly the realization came to me in regards to my own personal driving and riding history. I admitted to myself that I have run a yellow light and I have ridden my bike on a sidewalk without wearing a helmet. The fouls I’ve committed may not be as serious as blowing courtesy corners in the dark with no lights on a bike or being one of those too numerous dick drivers on the roads, but they are still fouls. How can I stand on the soapbox and pontificate if I have also committed transgressions? Where does societies inaction to all our infractions lead?

Where is that line? How do you know when you have crossed the delineation that sets the boundary between the rules of the road as we were all taught and operating within the “grey area”? Where and when was “grey area” discussed and who set the fluid grey boundaries? Sometimes I think that the whole traffic light, green means go plan is just a giant science experiment by secret government officials. The question they are studying is how many years will it take North American driving society to totally transition from green means go/red means stop to the reverse. With the amount of late light runners today, people are actually delaying moving forward on the green for a number of seconds, just making sure the coast is clear. Every year traffic waits longer when they have the right of way.

Why are we all losing sight of the right way? Nowadays it seems more of us so called good, law abiding people are dabbling our toes in the wrong way. If the other dude looks like a lady, ethnic, aged religious scenester is doing it, then we all will as well. A gradual vehicular, transportation anarchy is unfolding before our eyes. Now they are going to add driverless cars to all the traffic flow, riderless bikes are sure to follow. Why is this dangerous misbehaviour accepted? It seems like a done deal that we all will just operate our personal transportation units faster, more aggressively and with less consideration for others.

A movement can only begin if people jump on board and take it forward. One driver or rider at a time makes the commitment to courtesy and to following the rules of the roads. Together we can stop this selfish driving nastiness and bring a return to a time when personal transportation wasn’t just every person for themselves. I know it can be done and I’m going to be one of the first to sign up when that day comes. Crossing the Port Mann Bridge, my mind is clear as I ride back into Vancouver. The lovely late afternoon sun glints off the windshield of the car hard on my ass. I accelerate deeper into the allowable speed limit “grey area” of the car pool lane to provide myself a little comfort zone then change lanes on a solid line. The dude blows by at about 50 shades of grey over the line.

There are some old cliches or sayings that hit the nail on the head when it comes to pompous righteousness. He who is without sin can cast the first stone is one. Thou shall not throw stones if one lives in a glass house is another. I try real hard to be a courteous, safe driver and rider, and I know most other people on the roads or bike paths try hard as well. Yet if we all still go grey from time to time, how do we stop those who push the boundaries further? I guess it’s true what they say, grey is the new black